Portions of this post have appeared on Don Day in SMA previously.

I don’t remember my exact age when I tasted my first banana but I remember I was already a few years old. I’m not sure if it was rationing, scarcity, price, or just that they hadn’t yet perfected how to transport bananas to Europe in their pre-ripened stage.

I do remember how good it was. My mother sliced it lengthwise and positioned it between two thick slices of a whole wheat bread called Hovis that had a picture of a boy on a bike on the wrapping. I wanted a banana butty (that’s what we called it) for lunch every day of my life. And I also wanted that bike.

Not long ago, I had another new fruit for the first time in my life. And, though it didn’t have the life changing impact of that first banana (I didn’t want it every day of my life or a new bike), I did want to have it again. And soon.

I’d never seen it before I started coming to Mexico. I think it’s because, like white-fleshed peaches, black-skinned figs and my redheaded daughter, it doesn’t travel well.

The fruit is a Mexican native called mamey sapote. The first word is pronounced like a Canadian asking what a certain cooked meat is and then changing the H to an M. The second word is pronounced with a bit of a zee (or zed) sound to the S and sometimes you’ll even see it spelled zapote.

I’m not sure why it took so long before I finally tried a mamey sapote. It’s certainly not the most attractive of fruits. The outer casing looks like a cross between peach fuzz and sandpaper (#400 Grit if you’re one of those handy people). The mamey sapote doesn’t exactly cry out and say pick me up and take a big bite out of me.

The word sapote is believed to derive from the Aztec tzapotl, a general term applied to all soft, sweet fruits. I had tried other sapotes, including the white sapote, sapodilla, chico sapote and chapote. I’d even written a blog about the black sapote. But never the mamey.

What pushed me into it was a guy pushing them at San Miguel’s Tuesday market. He was one of those guys who didn’t have a stall, just a piled-high bushel basket near the parking lot. A true hawker, a pitchperson, a huckster, a peddler or what my English mother called a costermonger. He knew about the art of sampling. He handed me a free chunk of the deep, salmon-colored flesh and I behaved just like a fruit fly.

I wouldn’t say describing the taste of a mamey sapote is quite that difficult. Start with sweet potato. Then add a little pumpkin and papaya with a little bit of cherry and you’ll be fairly close. Add hints of chocolate, almonds and vanilla and you’ll be even closer.

I asked the costermonger how I would know the mamey sapote was listo para comer hoy (I quit Mango Spanish before we got to the word for ripe). He took his nail and scraped the flesh of a fresh sample and showed me the color that lay buried beneath. No es verde, no amarillo, no naranja, solo rojo, he told me. And it must be a little suave (soft).

The texture of the skin is somewhat the same. The best technique for opening it is exactly the same: make a slice all the way around lengthwise; hold one half in one hand and the other half in the other; and twist. The large black seed, which is also very much like that of an avocado is then easily removed and you’re ready to enjoy. 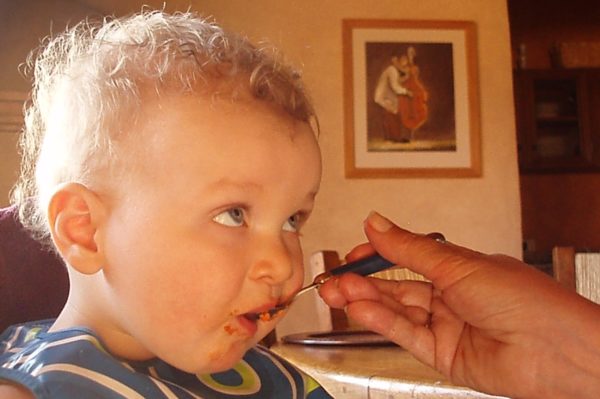 A while back we gave our youngest grandson, Wesley The Wonder Child, his first taste. He said “ooooogooooeeeeeooooo”. Which is baby talk for “Thank you, Grampy, for not making me wait until I’m 70 for my first taste of mamey sapote.” Well something like that anyway.