Free range chicken. Is it worth crossing the road for?

Did you notice anything different about the sound of the rooster? Did you notice it wasn’t the typical call of a San Miguel rooster? The kind of cock-a-doodle-do that could wake up Rip Van Winkle at 5:00 am from six blocks away.

No, that was the sound of a wounded rooster. A rooster with a broken heart. For two days before, we had stolen away with three of his best girlfriends. Good looking ones too. Redheads. From Rhode Island.

We were at Rancho Toyan, the organic farm and winery on the road to Queretaro. Chef Boris Olvera and his wife Jessi and Don Day’s Wife and I. Having lunch and picking up the veggies that would be accompanying the broken-hearted rooster’s lady friends to dinner the following night. 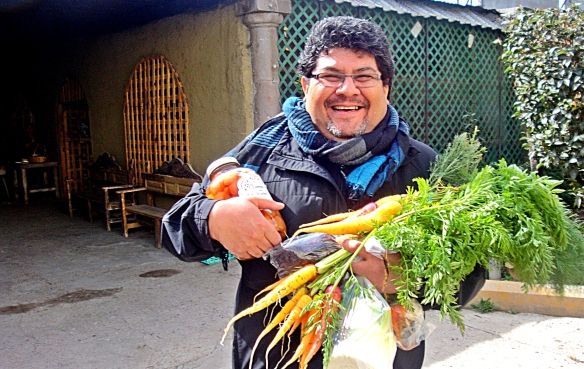 The chickens were something I had been searching for in San Miguel de Allende for over a year. It had been a long and frustrating journey. I’d hear of a farm that was raising free range chickens. But then they wouldn’t let me visit the farm to take pictures of them. Or even email me a photo. And guys from Toronto are a lot like guys from Missouri.

Then I discovered that Rancho Toyan not only had naturally raised pork and lamb but hormone and antibiotic free chickens who actually played outdoors and saw the light of day. Instead of spending their short lives in what can best be called a meat factory.

It had been years since I’d had a free range chicken and, frankly, I couldn’t remember what it tasted like. Or even if it was really better than what I might eat at Pollo Feliz (which I do rate as very tasty chicken…but that’s all about the rub). I was on a mission, a very serious mission to find out. And, call me a heartless bastard if you wish, I wasn’t out to save any chicken’s lives. You’d never find me outside of Pilgrim’s Pride’s headquarters with a “Save Henny Penny” banner. I just wanted to experience what might be the best tasting chicken in my life. 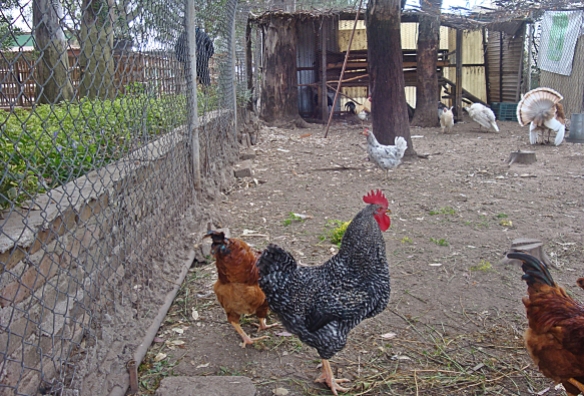 The organic chickens from Rancho Toyan had lived to the ripe old age of eight months. Well at least I’d hoped that age would be ripe. Or would it be overripe? Would it just mean that the birds’ flesh might be a little more tough? Maybe more dry?

Boris Olvera had agreed to help us find the chickens. And had agreed to cook them so that we’d get the very best flavor out of them. I invited ten friends to Moras 61, home of Casa Olvera. And dinner was on.

Chef Boris put together a menu where we’d have three different opportunities to taste the difference I was confident free range would make. We’d have a chance to savor it fried, boiled, and roasted.

First up at Casa Olvera, the fried chicken tenders. Served on a skid mark of tangy sauce. The appropriately named tenders, from the pectoralis minor muscles under the breast in case you’re into avian anatomy, were lightly breaded as they traditionally are. I slid one across the sauce and took a bite. Was there any difference with factory chicken? I wasn’t sure. I took another mouthful of the tender, this time avoiding the sauce and closed my eyes. No, not much difference in taste from any other chicken tenders or fingers or nuggets I thought.

Time for the second course. The soup. Called brown chicken soup because Boris had roasted the bones before using them to make the stock. Floating in the broth were chubby white dumplings and the rainbow of carrots the Olveras purchased at Rancho Toyan. But was it more “chickeny”? Not to me. But maybe to the rest of the table.

“Any better?”, I asked. The answers were all about the same.

Boris had wet brined the chickens overnight, in salt, sugar and spices. Exactly what I’d hoped he do. And he’d deboned them so that everyone would get a taste of both breast and leg. They were nicely stuffed with local Monte Rey mushrooms. And served in Mexican fashion on a bed of beans.

Don Day is a dark meat kind of guy so I started with the leg. I made sure I had a big piece firmly on the fork, closed my eyes again, opened wide and set the teeth and tongue to work.

It was good. But it wasn’t different. It was just like the chicken I’d had every time I had chicken over the last few years.

We were split into six at one, six at the other table so I wandered over to table two and asked them to raise their glasses for a photo op, and then took a poll asking them if this chicken was any better than ordinary, everyday chicken.

Damn it, was I disappointed. This was even worse than the night before. When I had to endure the ending of “Gone Girl”.

I asked Chef Boris if he thought the free range chicken was better. Boris usually has a lot to say but he was unusually silent. He just cocked his head to one side, gave a little smile, and shrugged.

I’d finally reached the end of the rainbow and there was no gold. But maybe there was still hope.

As my ex-wives will tell you, Don Day was never very good at husbandry, except I do know a little about the part that concerns free range livestock farming, so I’ll share what I know with you.

There are different meanings for free range when it comes to poultry, depending on where in the world you live. Most countries look to the USDA for agricultural standards and then beg, borrow or steal what they say. But the USDA simply says that, in order to be called free range, the poultry must “have access to the outside”.

Looking beyond government definitions, there are two quite different ideas on what free range means and they’re best described by the terms “yarding” and “pasturing”.

“Yarding” generally refers to animals that live in a caged area, who are fed daily and receive the benefits of exercise and sunshine. “Pasturing” refers to birds (like the ones in the photo that was shot at a farm in England) who are free to wander in fields and eat grasses, grains, insects, grubs and whatever else they can find; most “pastured” birds will, however, also receive a supplemental diet or they’d never come home to roost. Rancho Toyan‘s birds are “yarded”. But what if I could find “pastured” birds in or around San Miguel. Would that make a difference.

That is what I was already thinking as I and I’m sure everyone else at Casa Olvera enjoyed an absolutely over-the-top decadent chocolate dessert. The chocolate was from Oaxaca where, traditionally cinnamon and ground almonds are included in the bars. It was a nice finale and the Olveras were the most gracious as always hosts. But I still couldn’t help thinking about the birds.

Then, in the cab to La Noche, Don Day’s Wife said something to me.

“Wasn’t that great!”, she exclaimed.

“Great?”, I asked. “I don’t think I could tell the difference between free range and supermarket chicken.”

“No”‘ she replied. “Not the chicken.” “But the whole experience.” 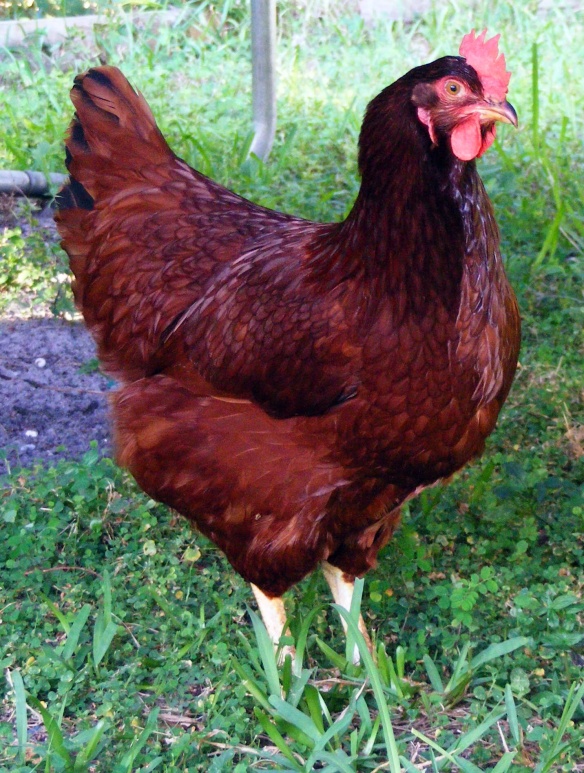 “Going to the farm. Hearing a rooster crow. Seeing chickens when they still have feathers. Shopping for the organic veggies. Sharing an evening with good friends. And just knowing those chickens lived five times longer than supermarket chickens. That’s what made those free range chickens special.”

La Casa Olvera serves Puerta Cerrada style dinners at 7:00 pm on Thursdays, Fridays and Saturdays at their B&B at Las Moras 61 in San Miguel de Allende, Mexico. The menu is posted each week on their Facebook page at facebook.com/lacocinasma and is available by reservation only by calling 415 117 1151.