My ship has sails that are made of silk,
The decks are trimmed with gold,
And of jam and spice
There’s a paradise
In the hold.

I’d been waiting a long, long time. But I knew somehow, someday my ship would come in. Well not exactly a ship. Not in the middle of a desert. But a truck. And, of course, a food truck.

The ships I longed for had been sailing into other places for a few years. Into New York, Chicago, San Francisco, L.A., and into Don Day’s second home, Toronto. I’m talking about Mexican street food, dishes like tacos, gorditas, tostados, tortas and all their immediate family and close relatives, that had been elevated by restaurants on wheels and those on terra firma to a much loftier status. I’m not talking about anyone reinventing Mexican cuisine. I’m talking about a different filling here, an extra ingredient there, a slight variation on a traditional sauce. Add them all up and you had something I was very excited about and hoped and prayed would come home to where it really belonged. My Mexico.

In late Summer, the winds were favorable. Nueva Cocina Mexicana did sail into San Miguel de Allende. In a bright yellow truck outfitted for foodies. The exact same color as the Buddy L dumper that I filled with sand when I was knee high to a chapuline. The owners call their business an antojeria which, more or less, means a place that satisfies little whims or cravings. For the last little while it has been more than satisfying mine.

The name of the business is La Agustina. I have no idea what the two words mean. I of course know La is Spanish for the definite article. But all I know about Agustina is it’s a woman’s name and neither of the two women I’ve met at La Agustina are called Agustina. I’ve always thought a borderline food expert like Don Day should know what La Agustina is but, so far, I’ve been far too embarrassed to ask.

Agustinas are also the name of one of La Agustina‘s signature dishes. Which makes it doubly embarrassing to ask the origin of the food truck’s name.

Agustinas are a tortilla filled with pork shank that’s been cooked into heavenly tenderness, bathed in a mild, peppery sauce, decorated with a little tomato, onion and Oaxaca cheese, then topped with a lot of shredded lettuce and a zigzag of sour cream. Agustinas were my introduction to the food at La Agustina. A pleasure to meet you. Mucho gusto. Tell me more about yourself, I wanted to say.

La Agustina arrived in San Miguel de Allende at the end of August. It’s parked almost at the busiest corner in San Miguel. Not far from the Glorieta where revolutionary hero El Pipila looks down on the Libramiento a Queretaro and Salida a Celaya. But it might as well be a thousand miles away. Because unless you’re on a mission to find La Agustina, you may never locate it.

The busiest corner in San Miguel is where you’ll find Pollo Feliz, San Miguel’s biggest fast food joint. It’s also where you’ll find Mega, San Miguel’s biggest supermarket. All I can suggest is park at Mega (Pollo Feliz doesn’t take too kindly to people parking there and going elsewhere) and look across the street to the north. Just to the right of Pollo Feliz‘ parking lot you may get a glimpse of yellow. Cross over the pedestrian bridge and walk east for about 30 meters and you’ll be there.

The second thing I ever had at La Agustina was a panucho. But not the panucho from the Yucatan that’s traditionally stuffed with black beans, chopped cabbage and chicken. La Agustina‘s panucho keeps the deep fried taco as a shell and then replaces the chicken with pork, in the tasty form of cochinita pibil, then adds refried golden beans and lightly pickled onions. They asked me if I also wanted habanero but, as there was no macho contest going on with any other guys, I passed.

I must admit it was the color and graphics that originally drew me to La Agustina. Almost everything is canary yellow. The truck, the plastic trays that hold your food, the menu, even the tiny artificial roses that grace the one and only table.

It all looks very professional as do the three partners in the business, Monserrat, her boyfriend and chef Francisco, and sister Mariana. I somehow trust people who are dressed in crisp white chef’s jackets and dark blue aprons to serve me very good food. And they do. 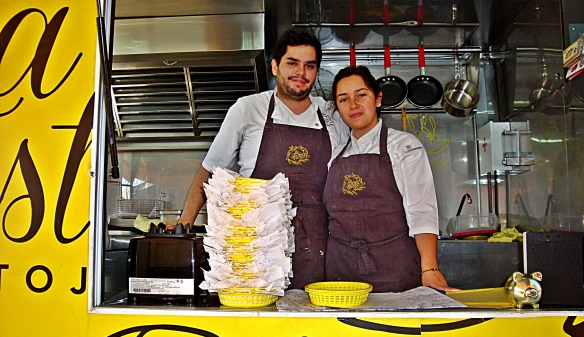 La Agustina‘s roots go back to a restaurant in Pachuca, the capital of the state of Hidalgo. La Agustina‘s empanada reminded me a little, at least in shape, of the pastes (pronounced almost like those things strippers used to wear you know where, only with the “a” pronounced more like the “aah” sounds that came from the audience) that Pachuca is famous for. The empanada had something in it that I’d never had before in a Mexican empanada. What Mexicans call jaiba. And what I call crab.

Mexican cuisine often drowns seafood in sauces. What’s nice about La Agustina‘s empanada is there’s very little else inside the deep fried pastry than the crab and a hint of cilantro. What’s also nice about it is what it comes with. Now the last time I said I loved salad, Don Day’s Wife threatened to rush off to get a thermometer and take my temperature. But you could hardly even call this salad. It’s simply shredded lettuce but the lemony dressing that tops it is divine.

I always have three reasons for ordering octopus. First because I enjoy it so much. Second because it’s a great way to test the abilities of a chef. And third because I enjoy it so much. La Agustina serves their octopus on a tostada smeared with refried beans, simply seasoned with garlic, and topped with avocado. There’s one more thing on top and it may seem insignificant but it actually makes the dish. It’s a light sprinkle of salt and if you’ve ever tasted what salt can do to chocolate, if you know how important it is to something like french fries, you can perhaps imagine what it can do to octopus and avocado. And did the octopus pass the test? Yes, the tentacles were very tasty and very, very tender. 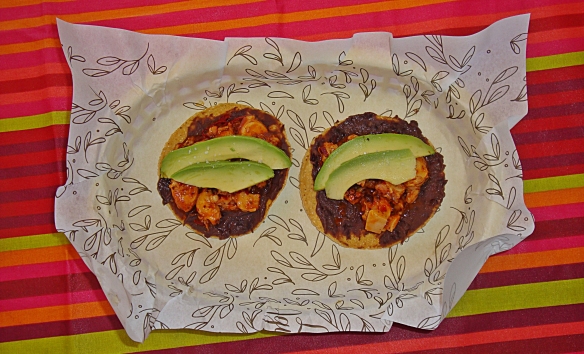 There are other standout dishes on La Agustina‘s short menu. Bacalao a la vizcaina is a treatment of cod that originates in the Basque country and is commonly found in Spain but never, to my recollection, in San Miguel. Plus there are fish and seafood tacos that are bathed in guajillo chile sauce. 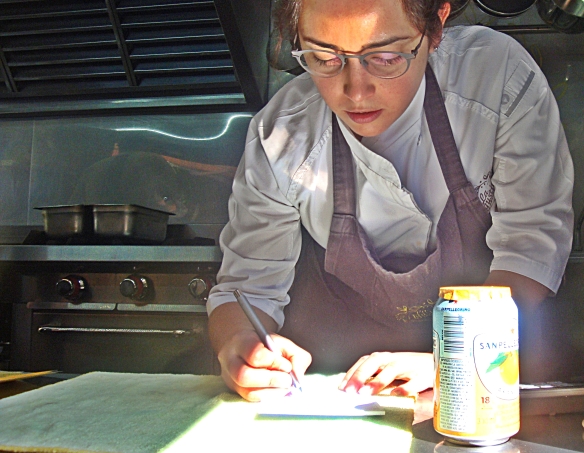 As solid as all the dishes are, the liquids leave a little to be desired. As much as I appreciate that San Pellegrino sponsors the World’s 50 Best Restaurants competition and is a classy drink, image wise, to serve from a food truck, the taste of their limonata just isn’t as desirable as the beverage maker’s image. No I’m not expecting wine, or even beer from a food truck, but please, La Agostina consider at least one more choice on your beverage list. Or don’t be surprised if I sneak my own Diet Coke over from Mega. I’ll even pay corkage.

Food trucks have always had a problem in San Miguel de Allende. Getting close to the center of town where there’s lots of foot traffic is an impossibility in a place that’s a Unesco heritage site. And even a guy who lives to eat absolutely agrees with that decision. La Agostina has just about everything going for it except location. Though it does make every grocery shopping trip to Mega a lot more inviting.

Monserrat told me, “I think we’ve found that new location and should be there in January.”

There could be a lot more wind in the sails of my favorite new ship in the new year.

La Agustina is located on Libramiento a Queretaro (across from Mega) in San Miguel de Allende, Mexico. The truck is open everyday except Monday.

My Ship lyrics I learned from a Nancy Wilson record. The song was written for the soundtrack of the 1944 film Lady in the Dark.